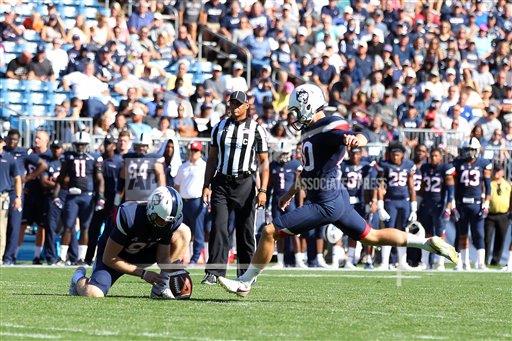 Those who are regular visitors to this blog know I like to crunch numbers. I find it beneficial to supplement my stories by having some statistics to back things up. However, in all the time I have gone through statistical databases or looked up box scores from previous year, I'm not sure I ran across a stat like the one I just recovered.

Since UConn's last winning season in 2010 the Huskies opponents have had better average starting field position 45 times and UConn has won on just six occasions. In the rest of the games, the Huskies record is 21-14. That is some staggering stuff.

This is relevant because of the work of Michael Tarbutt and Bret Graham in Saturday's win over Tulsa. Tarbutt kicked off five times and each time it resulted in touchbacks. Meanwhile Graham punted seven times for an average of 40.6 yards and even more impressively, Tulsa returned only one of those punts for zero yardage. Let's be honest, Tulsa ranks near the bottom of the FBS ratings in both punt return and kickoff return yardage but to have a game when the other team doesn't gain a positive yard on kickoff or punt returns is something that deserves more attention than it received.

I was a little surprised to discover there have been 20 games featuring at least one FBS team when a team had no punt return or kickoff return yardage including the Colorado/Colorado State game featuring six kickoffs and 10 punts without a single yard being gained on returns (there was, however, a touchback on a punt). Still, UConn's 12 kickoffs and punts without a negative result (positive yards on kickoff or punt returns, a kickoff out of bounds or punt into the end zone) is tied for second during the 2017 season trailing only the 13 by Mississippi State against Louisiana Tech.

"Everybody gets caught up in this spread offense and all this stuff, that sells tickets but at

the end, defense sells game and field position wins games, that ain't ever going to change," UConn coach Randy Edsall said. "Everybody wants all this sexy stuff and everything else but when their average starting position is the 19 or you can kick the ball out of the end zone, I will take that every time because that just takes one opportunity away from them trying to score. Five times because of Michael kicking the ball the way he did took an opportunity away from them to try to score or gain field position on us. To me that is huge because if you have to drive it 75 yards, there's a lot of things that can happen in that 75 yards."

As Edsall mentioned, Tulsa's average starting position was its own 19. I did some checking and in last year's season opener Maine started at its 18 but counting only FBS competition and the last time a UConn opponent failed to have a starting field position of at least its own 20 was South Florida in 2013.

"When they have to go 81 yards and 75 for me, you are doing your job and basically you are

helping out the defense as much as possible, that feels unbelievable," Tarbutt said. "Honestly, that is better than hitting that 40 or 50 yard field goal in the game that bounces you back into it. Just knowing that you ae helping out the defense, making it as hard as you can for their offense and meanwhile the head coach on the other side is so frustrated because he's thinking I have to go 80 yards every single time with we punt the ball or kick the ball, that is one of the best feelings."

The most amazing part of all this is that the zero yards on returns is not even a program record. In last year's game against East Carolina both of Bobby Puyol's kickoffs were touchbacks while the only one of Justin Wain's four punts to be returned went for negative 1 yard. In a 2015 game, Temple had no yardage on special teams as well.

There will be much more on Tarbutt including him reflecting on the fact that UConn has more players from Canada than any other FBS teams (the Huskies have five, Buffalo is next with four followed by Oklahoma State with three), his hour-long drive to go attend Canisius High School in Buffalo for his final two years in high school, recalling his 60-yard field goal in high school, how Scott Norwood of the Buffalo Bills' missed field goal in the Super Bowl served as motivation and how he handled some early season struggles when it came to accuracy on his kickoffs.