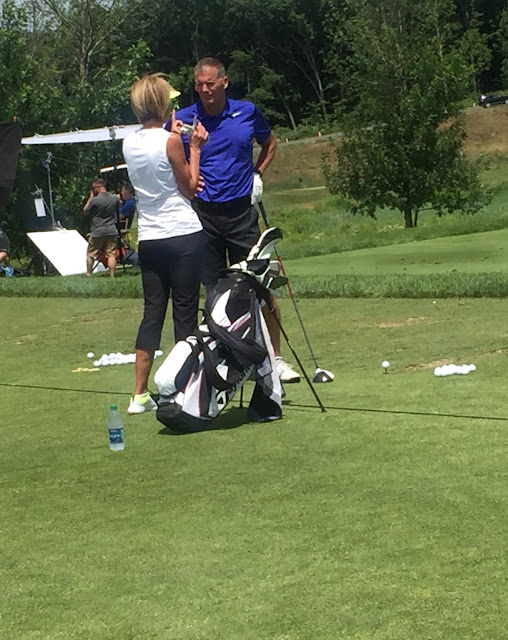 With the exception of Batouly Camara, all the members of the 2018-19 UConn women's basketball team will be available to the media at Geno Auriemma's annual Fore the Kids golf tournament so look for some updates to be coming soon. In the meantime, in between her participation in the charity mini-golf tournament and the celebrity pro-am UConn associate head coach

Neither Katie Lou Samuelson (ankle surgery) nor Mikayla Coombs (blood clot issue) are cleared for basketball work but both are getting shots up and doing the work in the weight room.

"Her range of motion is improving," Dailey said of Samuelson. "She is working really hard in the weight room. She is doing a great job keeping everybody (in line), she is really taking on the leadership role and doing a tremendous job. We are looking forward to having her back on the court."

Coombs' freshman season ended prematurely due to the blood clots and now she is working to return to the court.

"Still unable to have contact, on medication but she is doing the shooting but can't play at this point," Dailey said.

Two players who can play are freshmen Olivia Nelson-Ododa and Christyn Williams, who have been on campus for a few weeks giving them a chance to take part in the offseason conditioning program and in the pickup games.

"It is a quick five weeks, probably (quick) for me and not for them," Dailey said. "For the freshmen, it is the first time going to class ... It's been great. I think the leadership of our older players with Napheesa, Lou and Crystal they have been terrific with the young guys. They are working really hard so I am pleased.

"They are freshmen but they are not backing down, they are fighting through being tired and what we are asking them to do and I think that says a lot about them. They are two tough kids and are going to be thrown into the fire pretty early so this is a good test for them."

Nelson-Ododa and Williams are members of the U.S. team competing in the FIBA Americas U18 Championship from Aug. 1-7 in Mexico. They will head out to Colorado Springs on July 20 to begin preparations for the tournament.

Dailey admitted that this is an interesting time for the coaching staff. With Marisa Moseley taking over as Boston University's head coach, former graduate assistant Jasmine Lister has returned to UConn this time as an assistant coach. With Shea Ralph set to give birth to her first child in the coming days, it could make things a little more hectic than normal during the July recruiting periods.

"This has been the most unsettled our program has been," Dailey said. "I don't remember a spring where there has been this much change and this much uncertainy with how everything works. We've always just adapted, whatever comes out way we handle. Shea is going to have a healthy baby and we will cover what we need to cover when she is not there. I think within the next week (she is due to give birth). Hopefully next week at this time we will be celebrating a new Husky."