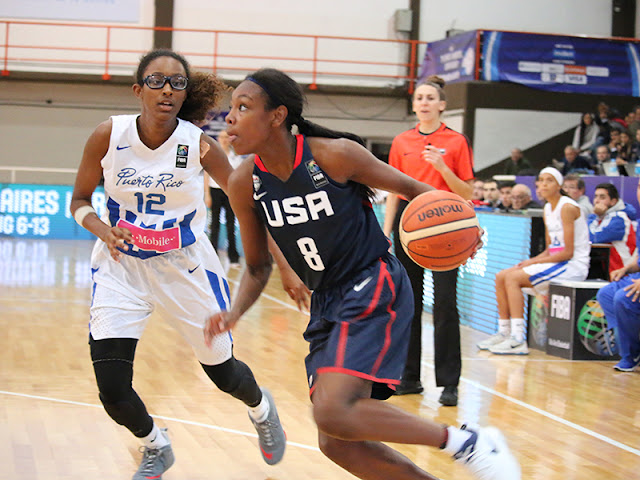 When Jordan Horston cast her eye toward playing high school basketball, she sort of figured she would have normal size to play point guard. That all changed when she grew six inches in a summer and after leading Columbus (Ohio) Africentric to its second state time in her first three high school seasons, she now stands 6-2.

While her body has changed, the essence of who she is when Horston steps on the basketball court remains the same. She revels in her ability to make her teammates better and would rather throw a crisp bounce pass leading to a layup for a teammate than fire away at will on the perimeter.

"My style of play, I like to pass the ball anyways, I like getting my teammates involved because it makes the game a lot more fun," said Horston, a top 10 rated player in the Class of 2019 who is planning to take a visit to UConn next week.

Horston was not only a member of the U.S. team which won the gold medal at the 2017 FIBA Americas U16 Championships but she led the squad with 17 assists and was second on the team in 106 minutes played. Now she is looking to make the U17 team competing for a world title in Belarus from July 21-29.

Horston is the type of player who could set off a triple-double alert each time she steps onto the court. She averaged 18.1 points, 6.2 rebounds, 4 assists and 4.3 steals per game as a junior when she was a co-winner of the Ohio Prep Sportswriters Association Division III Player of the Year honor. Horston has the length to play on the wing and that is exactly what she did as a junior but she still has the same point guard mentality before her growth spurts.

"I feel like every kid should start off with basic ballhandling because you never know if you will grow or not," Horston said. "I am glad I grew but I am also glad I had those point guard skills as well. It is like having two point guards on the court at the same time if I don't have the ball a lot."

The plan is for Horston to be back at point guard for her final high school season.

Horston's athletic background is a rather interesting one. She was coached by her dad when she learned the game and related to former North Carolina and WNBA star Sylvia Crawley who is an assistant coach with the Tar Heels which certainly figures to have played a factor in North Carolina being the first program to offer her a scholarship. However, her first athletic endeavor was as a cheerleader. Then she shifted to soccer and there was a time when it looked like that could be a sport she stuck with. Track and field came next before she got serious about basketball. She has also run cross country and in high school she is a star tennis player and a member of the softball team.

Although she is the epitome of a team-first player, taking part in individual sports like tennis, cross country and track aided in her development as an athlete and person.

"Definitely I think it helps me especially if you are doing track or cross country because it keeps you in shape for your next sport," Horston said.

Something else that allows Horston to stand apart is her loyalty. In this age when players change high schools and AAU programs seemingly on a whim, Horston has been committed to Columbus Africentric and since she started to play with the All Ohio AAU program, she has not had a wandering eye.

"He (Jaybee Bethea) got me to where I am today so he put me on the stage to let me do what I do so why would I (leave) because he is the reason I am where I am today and it is a good program," Horston said.

Horston's former AAU teammates Valencia Myers and Bexley Wallace signed with Florida State and Penn State respectively and they've been there to give Horston somebody to bounce ideas off when the recruiting process might get a tad bit overwhelming.

"They pushed me and they have already told me that it is your decision, you just have to pray about it and don't get stressed out about it," Horston said. "They just give me a lot advice on how I should handle the recruiting process. I think I am doing a pretty good job. At first it was overwhelming but I have narrowed (the list of schools) down so it has been a lot easier."

While she hasn't been focusing on recruiting since arriving in Colorado Springs, that will soon change as one of her first tasks after the trials are over will be heading to UConn for her visit.

"I am definitely excited," Horston said. "You know he (Geno Auriemma) is a great coach, he makes players better and that is what I want, I want somebody to push me and make me better. I don't want to go somewhere where I am comfortable because that is not how I get better. I'd like to be put in an uncomfortable situation so I can get better so I feel like he does that. I have watched some of his practices, I just feel like he is a great coach and he produces great players."

after Saturday's morning session and she was among the 102 players moving on. Mercy High School forward Vienna Knox, the only Connecticut native at the trials, did not make the cut. The 12-member team will be announced on Monday.