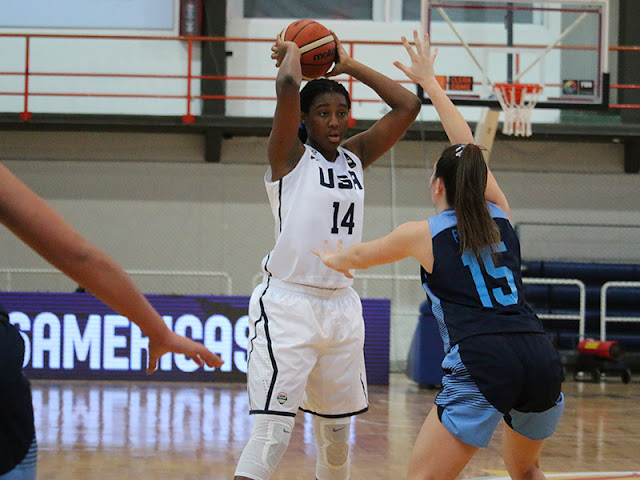 Years before the honors started heading Aliyah Boston she was just another wide-eyed youngster heading out to the University of the Virgin Islands Sports & Fitness Center watching some of the top teams and players in the Paradise Jam tournament each November.

"Since I was younger I went every year," Boston said. "It did help because I got to watch basketball at another level."

UConn, which will play in the 2018 event, went undefeated at the events in 2007 and 2012 at that time they had no idea that a player who is one of the top recruits in the country would join the legions of fans of the UConn women's basketball program.

"When I first started playing basketball I loved UConn so I think it is just natural," Boston said.

Even with hosting elite programs on an annual basis, it's not easy for rising girls basketball players from St. Thomas to catch the eye of the top college programs. So in 2014 Boston made the difficult decision to leave her parents and move to Worcester where she lives with an aunt.

"It was really just about more exposure for basketball and better schooling," Boston said.

Boston would enroll at Worcester Academy and become a two-time Gatorade Massachusetts Player of the Year and now she has a chance to become the first girl from Massachusetts to win the award three times. Her story bears a striking resemblance to the journey Jonquel Jones of the Connecticut Sun took to become one of the WNBA's rising stars. It has come at a price as being away from her parents can be challenging to say the least. That was never more evident than in September when Hurricane Irma touched down in St. Thomas, causing incredible carnage. Another category 5 hurricane hit the area a couple weeks later. There were some anxious moments when Boston was uncertain how her parents were doing. They were OK but in late September she tweeted "my home has been severly damaged from two category 5 hurricanes. Please help me provide disaster relief by donating whatever you can."

"I think I am getting better," Boston said of dealing with being away from her parents, "but it is still tough."

Boston knows why she relocated to New England and is taking advantage of her opportunities. She's a B student at Worcester Academy and is fresh off leading her school to the NEPSAC 2A title. She averaged 21.2 points, 14 rebounds, 2.5 assists, 2.2 steals and 6.2 blocked shots per game. Her junior season was highlighted by four triple-doubles and 19 double-doubles. She also had three games with at least 20 points and 20 rebounds as a sophomore. Last summer she not only made the U.S. team which played in the FIBA Americas U16 Championships but she was the leading scorer and rebounder for the gold-medal winning United States squad.

Now she is back looking for a spot on the team playing in the FIBA U17 World Championships.

If Boston spends any more time at the U.S. Olympic Training Center in Colorado Springs, Colorado she might need to start paying rent. Not only was she was the U16 trials in 2017 but in March she teamed with Notre Dame commit Samantha Brunelle and UConn Class of 2020 recruiting targets Paige Bueckers and Hailey Van Lith on the winning Quest team at the USA Basketball Women's 3x3 U18 National Championship. Those four will reunite in October when they represent the U.S. at the Youth Olympic Games in Argentina. Now she is back in Colorado again.

Boston credits her 3x3 experience for helping develop her game and play at a quicker pace.

"I think it does because it is so much faster than a regular 5 on 5, things happen so quickly so that really helps you out," Boston said. "It is really special because when you get to wear USA across your chest, it is just a great opportunity and it is just exciting."

Boston, the No. 7 rated prospect in the Class of 2019 by ESPN, will set up her five official visits before making her college decision. She isn't ready to divulge her list of five finalists but did say, "I'm down to five, UConn on that list."